& Tarantella
& Self and Soul
& The Concert

& Tarantella
& Self and Soul
& The Concert

The wonderfully fertile choreographic imagination of Wayne McGregor returns to The National Ballet of Canada with his 2007 work Genus. Inspired by Darwin’s On the Origin of Species and set to a score by Joby Talbot and Deru, Genus is choreographed for 24 dancers and features much of the intricate and rigorously conceived dance vocabulary— breathtaking extensions and undulations that seem to test the very boundaries of physical expression— that is the hallmark of Mr. McGregor’s work. Genus is contemporary dance at its most exhilarating.

George Balanchine admired this music composed by Louis Moreau Gottschalk for its wit and audacity and choreographed a pas de deux for Patricia McBride and Edward Villella — two virtuosic dancers — in 1964. In his Complete Stories of the Great Ballets, Balanchine wrote of the music, “It is a dazzling display piece, full of speed and high spirits. So, I hope, is the dance, which is ‘Neopolitan’ if you like and ‘demi-caractère.’”

Self and Soul by Choreographic Associate Robert Binet was created for The Twelfth International Competition for The Erik Bruhn Prize in 2016, set to music by A Winged Victory for the Sullen.

Jerome Robbins’ The Concert is an uproarious comic jeu d’esprit centred on a group of concertgoers attending a Chopin piano recital. Inspired by the music, the concertgoers begin to fantasize scenarios of utterly shameless comic extravagance, all enacted by the dancers with appropriate gusto. Subtitled The Perils of Everybody, this is Robbins the populist at his best, the skillful entertainer who could wed brilliant choreography with slapstick panache and meld them into an unpretentious and lighthearted theatrical triumph.

“Sustains a breathless tension from the outset”The Guardian

Self and Soul Trailer

Inside the Studio with Genus 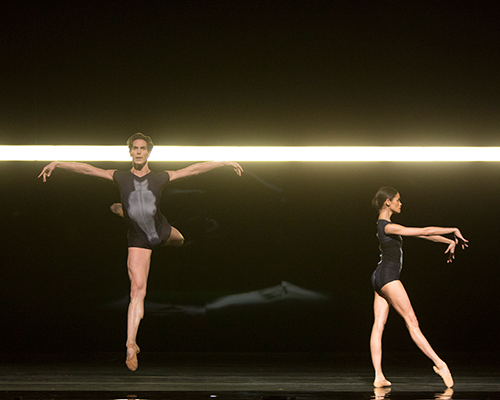 “Wildly ambitious in concept and execution” —The New York Times

“... the kinetic thrills and sensory overload of Genus leave you feeling that ballet, almost despite itself, is moving on” —The New York Times

“Robbins' The Concert...represents ballet comedy at its most inventive” —Toronto Star

“A witty, side-splitting romp through an imaginary front-of-house” —Toronto Sun

Genus is made possible by a generous gift from Sandra Simpson and the support of The Producers' Circle.

The Concert is a gift from The Volunteer Committee, The National Ballet of Canada.

The National Ballet invites you to attend the Genus & The Concert Ballet Talk 45 minutes before every show in the Richard Bradshaw Amphitheatre at the Four Seasons Centre for the Performing Arts.

Enhance your experience and learn more about our productions from Lindsay Fischer, Artistic Director, YOU dance/Principal Ballet Master.

The National Ballet's dancers enjoy the company's varied repertoire and the many opportunities to showcase their versalitity in a range of techniques and styles. Help support the contemporary works that challenge, delight and inspire both our artists and audiences.