One of the most captivating and enduring of all children’s stories, but one replete with themes and interpretive possibilities that allow it to transcend the limitations of just one genre, Pinocchio has been adapted to seemingly countless media and art forms over the years. Its hauntingly archetypal central idea, that of a man who so wants a child that he creates one—in the form of a marionette—out of wood, only to have the marionette come to life and create problems of his own, has proven a beguilingly potent metaphor to many artists. What began as an Italian children’s novel in 1883 has been made over the years into musicals, operas, animated films and television shows.

Now Pinocchio makes its full-length balletic world premiere this season with The National Ballet of Canada. Created by choreographer Will Tuckett, Guest Principal Character Artist with The Royal Ballet in England, Pinocchio is a wildly funny, often moving and sometimes even dark re-telling of the original story, recapturing the adventures of the famous wooden boy with brilliantly inventive choreography and unforgettable stagecraft.

“Tuckett's choreography is sympathetic and ingenious, giving an impression of overarching space within tight confines.” The Guardian 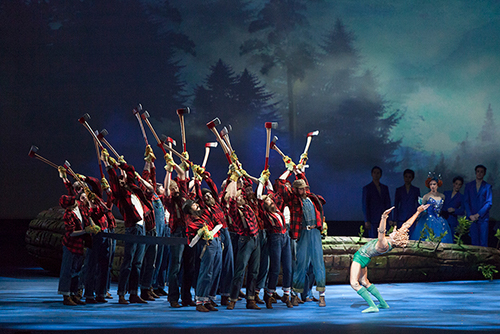 “Neat juxtaposition of musical and ballet, and chorus of principals – what a treat.” Haley Overland, Chatelaine via Twitter

All Performance Sold Out

Standing Room Only
Available day of show at the Four Seasons Centre in person only.

Assistant to the Choreographer:
Emma Brunton

Lead philanthropic support for Pinocchio is provided by the Walter Carsen New Creations Fund, with additional support from an anonymous friend of the National Ballet, Tim & Frances Price, The Volunteer Committee of The National Ballet of Canada and The Producers’ Circle.

The National Ballet invites you to attend the Pinocchio Ballet Talk 45 minutes before every show in the Richard Bradshaw Amphitheatre at the Four Seasons Centre for the Performing Arts.

Enhance your experience and learn more about our productions from Lindsay Fischer, Artistic Director, YOU dance/Principal Ballet Master.

A leader in the creation of new works, the National Ballet is committed to providing our artists and audiences with exciting new visions of dance. Help support creativity and innovation.