In his first work for The National Ballet of Canada, Dora Award-winning choreographer Jera Wolfe has created two separate duets set to the same music by Max Richter and edited together for film. Each duet incorporates small movements and gestures to provide insight into a personal relationship that can never truly be known from the outside. To emphasize this point, Soul is edited to show only half of each six-minute duet, leaving the rest of the relationship private. Wolfe created this moving, poetic work for Principal Dancer Guillaume Côté and First Soloist Tanya Howard and Principal Dancer Harrison James and First Soloist Ben Rudisin. Soul makes its world premiere as part of Spotlight Series, The National Ballet of Canada’s 2020/21 virtual season. 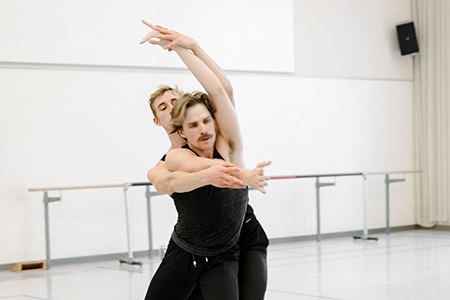 Toronto-born Jera Wolfe is a choreographer and performer of Métis heritage and is an Associate Artist with Red Sky Performance. He has created new work for multiple companies and festivals, including Fall for Dance North, Festival des arts de Saint-Sauveur, Danse Danse, Jacob’s Pillow and The Royal Winnipeg Ballet. He won the 2019 Dora Mavor Moore Award for Outstanding Original Choreography for Trace by Red Sky Performance.

Born in Germany, Max Richter is an influential composer and musician renowned for combining classical tradition with electronic and contemporary music. His high profile solo work and compositions for stage and screen include scores for the British television shows Black Mirror and Peaky Blinders and for the Golden Globe-winning film, Waltz with Bashir.

For over 25 years, Paul McNulty has worked as an editor, videographer and producer in television and documentary film as well as having partnered with numerous corporate clients, agencies and arts organizations in branding campaigns and productions. McNulty has worked with The National Ballet of Canada since 2013.