Choreographic Associate Robert Binet created The Dreamers Ever Leave You in 2016 in response to the sublime paintings of Group of Seven artist Lawren Harris. Originally performed at the Art Gallery of Ontario with live piano music by Lubomyr Melnyk, this piece replicates the spiritual energy of Harris’ northern landscapes through the controlled physicality of the human body. This presentation of The Dreamers Ever Leave You is filmed especially for Spotlight Series, The National Ballet of Canada’s virtual 2020/21 season. 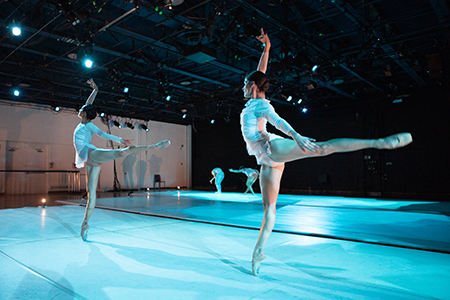 Toronto-born Robert Binet was appointed Choreographic Associate of The National Ballet of Canada in 2013 following his apprenticeship with Wayne McGregor, Resident Choreographer of The Royal Ballet. Binet has created new work for ballet companies worldwide and, in 2018, he launched CreativAction, a collaborative programme for Canadian choreographers.

The Ukrainian-born composer and pianist Lubomyr Melnyk is renowned for a rapid technique of piano performance and composition he calls Continuous Music, which produces a meditative effect. He has composed over 120 works and written a treatise on his technique, OPEN TIME: The Art of Continuous Music.

Ben Shirinian is an award-winning writer, director and producer. In addition to creating the Lost in Motion films with Principal Dancer and Choreographic Associate Guillaume Côté, Shirinian served as Multimedia Director for IMPERMANENCE, a new media ballet installation that premiered in Florence, Italy. Shirinian is currently attached to direct the feature Land of Decoration written by Andrew Lanham, adapted from the book by Grace McCleen.

The original presentation of The Dreamers Ever Leave You was co-produced by the Art Gallery of Ontario and The National Ballet of Canada and generously supported by Sandra Faire & Ivan Fecan, Kevin Garland, Joan & Jerry Lozinski and The Honourable Margaret Norrie McCain, C.C.