Trase Pa
by Kevin A. Ormsby

Trase Pa
by Kevin A. Ormsby

Kevin A. Ormsby, Artistic Director of KasheDance, makes his choreographic debut with The National Ballet of Canada in this thoughtful and aesthetically inventive work for three dancers. Trase Pa considers the ancestries and histories dancers bring to their work and, through film, invites audiences to share in their experiences. Set to the music of Haitian-born composer David Bontemps, Trase Pa makes its world premiere as part of Spotlight Series, The National Ballet of Canada’s virtual 2020/21 season.

In collaboration with the Art Gallery of Ontario, an open rehearsal of Trase Pa will be presented onsite at Walker Court as part of AGO Live, offering a rare look into the creative process. This is the National Ballet’s second collaboration with the AGO, following the highly successful commission of Robert Binet’s The Dreamers Ever Leave You. The rehearsals, originally scheduled for October 22 and 23 from 1:00 to 4:00 pm, have been postponed to a later date. Join Mr. Ormsby and First Soloist Tanya Howard on October 23 at 6:00 pm for a virtual panel discussion on the AGO’s Facebook page about the rehearsal process of Trase Pa, the return to the studio and Mr. Ormsby’s choreographic debut with the company.

Learn More About Kevin A. Ormsby

More Information About AGO Live 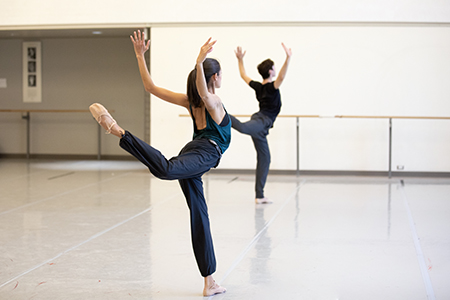 Kevin A. Ormsby is an award-winning dancer, choreographer, art strategies consultant and Artistic Director of KasheDance. He has collaborated with companies and projects in Canada, the Caribbean and the U.S., and he is providing guidance to The National Ballet of Canada on Equity, Diversity and Inclusion in his capacity as Program Manager for Cultural Pluralism in the Arts Movement Ontario (CPAMO).

Born in Haiti, David Bontemps trained in piano and music theory under renowned pianist-composer Serge Villedrouin. Now based in Montréal, Mr. Bontemps founded the Creole jazz quintet MAKAYA, for which he composes and arranges most of his songs. MAKAYA was nominated for the TD Grand Jazz Award at the International Jazz Festival of Montréal in 2010 and won the Vision Diversité in 2016.

For over 25 years, Paul McNulty has worked as an editor, videographer and producer in television and documentary film as well as having partnered with numerous corporate clients, agencies and arts organizations in branding campaigns and productions. Mr. McNulty has worked with The National Ballet of Canada since 2013.

Spotlight Series is funded by The Producers’ Circle.