Esie Mensah Creations is a vibrant dance/theatre company under the direction of award-winning choreographer Esie Mensah. For more than five years, this company has been committed to creating work that reflects and embodies the messages of Mensah's ancestors and community, and brings something new to the world of storytelling. Committed to elevating the narrative, Esie utilizes her unique style of Afrofusion with her knowledge as a movement director to embody complex topics to inspire dialogue. Performing both in Canada and internationally, Esie Mensah Creations’ repertoire includes Akoma, Zayo, Dora nominated Shades and short films A Revolution of Love and TESSEL. 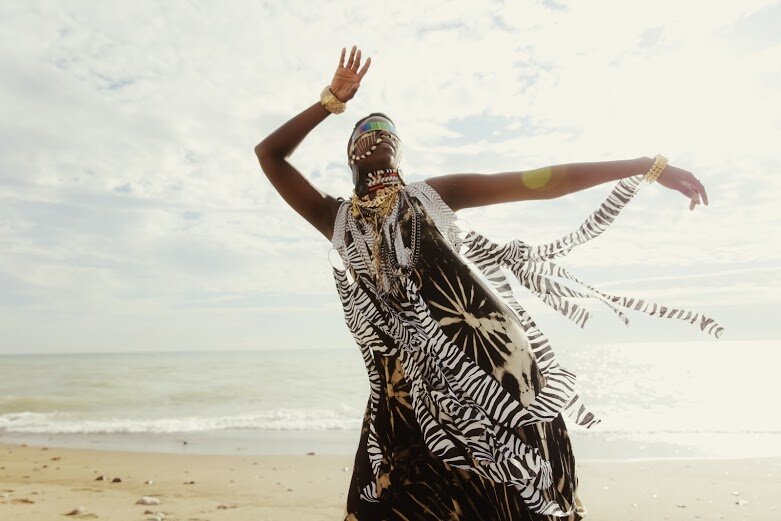 Open Rehearsals in the Outdoor Studio
What Esie Mensah Creations will be working on:

ZAYO speaks of a young person who has been given a task to embark on a journey towards their destiny. Unsure of what that means, they begin encountering a series of triumphs, challenges and tests, as they question if they have what it takes to reach the goal. Esie Mensah Creations will be working through the final section of the production, which focuses on the battles within the inner self. ZAYO was originally conceived for SummerWorks Lab Series in 2018 and received rave reviews prompting the Prismatic Festival in Ottawa to showcase the work for international presenters. ZAYO will return in 2022/23.

Esie Mensah (she/her) is an artist whose creative footprint extends into many genres, disciplines and regions. As a dancer, choreographer, director, educator and public speaker, Esie’s talent for of storytelling is as diverse as her experience. She has worked with megastars like Rihanna, Drake and Arcade Fire and iconic brands like Coca-Cola, TIFF and the Toronto Raptors and was a featured speaker at TEDxToronto 2019, where she spoke about her experience as a dark-skinned dancer and the process of creating her Dora-nominated production Shades. Her short film, A Revolution of Love, opened Toronto History Museum’s ongoing Awakenings initiative to decolonize historic spaces. More recently, Esie announced the world premiere of her newest short film, TESSEL, co-commissioned by Fall For Dance North and Harbourfront Centre. TESSEL is a national call of healing supported by 21 dance organizations from across Canada, streaming online at www.tessel.film.

Samson Bonkebantu Brown (he/him) is a South African-Portuguese Toronto-based sangoma, inyanga & hoodoo, ancestral anthropologist and playwright. His primary focus is on spiritual healing, ancestral veneration and anthropology, trans advocacy and the arts. He has been tasked by his ancestors to shed light on how ancestral veneration can assist with healing the self and living in one’s purpose. A multidisciplinary artist, imbongi author of two published plays (11:11 – A Monodrama in 7D, and 11:11), and widely known for his role in the viral Gillette "First Shave" ad, Samson's presence in the arts and media creates visibility for men of trans experience while educating the general public on trans issues.

For dancer and choreographer Irvin Washington, life and dance play hand in hand. Originally from Toronto, Irvin has worked with some of the industry’s very own including Janelle Monáe, Anjulie, Destiny’s Child, and Toronto’s Jully Black. More recently, Irvin could be found as a dancer and assistant choreographer on Season 1 of Canada’s Drag Race along with his ongoing role as Co-founder of the TKBA (Toronto Kiki Ballroom Alliance). Irvin’s talents within the Ballroom realm were also highlighted when he was featured as a Vogue performer in Fall For Dance North, one of the top international dance festivals. Irvin has toured from Canada to Europe for artists such as Black Eyes Peas, Alicia Keys, Danny Fernandes and Canadian Idol Eva Avila.

Rose-Mary “Rosie” Harbans is a Caribbean-Canadian multifaceted performer from Toronto. From a young age, her Caribbean heritage infused her with a passion for vibrancy, rhythm, and storytelling. Her compelling stage presence and natural ability to capture an audience has propelled her into a dynamic career. Rosie has forged her own path in the dance industry, touring internationally with Norwegian Cruise Lines and forming connections with renowned dance artists including Cora Kozaris (CARNÉ), Shameka Blake (Ashes), and George Jones Jr. (The Vibe Exclusive). She was also featured in the film A Revolution of Love, choreographed by Esie Mensah and directed by Weyni Mengesha (Soulpepper/ City of Toronto).

Kwasi Obeng-Adjei is a dancer and choreographer born in Toronto. After being accepted into the regional arts program at St Roch Secondary School, Kwasi was able to expand his knowledge training in various styles that include Jazz, Hip Hop, and Modern dance. He became a member of the Black Star Collective where his Afrofusion and traditional African dance training began. Kwasi has had the opportunity to assist Esie Mensah at George Brown College and teaches at many dance studios in the GTA including; The Underground Dance Centre and City Dance Corp. Kwasi’s Professional credits include the Pan American Games, Lua Shayenne Dance Company’s Kira, The Path | La Voie, Esie Mensah Creations, The Raptors Halftime Show.

Marie-Anne “River” Ross (they/them) is a non-binary Toronto based performer. They are also known as River Louboutin, from the House of Louboutin, Canada’s Ballroom Alliance. Recent Grand Prize Winner, River has made Canadian Ballroom History being the first non-binary person to walk and win “Face” (alongside King Louboutin). River has danced in film/television and live productions such as Disney’s Zombies 2 and Netflix’s Locke and Key and ZAYO, by Esie Mensah at Ottawa’s Prismatic Arts Festival. With the support of their Ballroom Family and fellow LGBTQIA+ community, River aspires to push the gender binary in acting, dance and performance.